The Settlement movement began in the East End in 1884 with Toynbee Hall in Whitechapel.  Universities and public schools gave money, personnel and backing to 'settle' students in residential communities and build a range of centres and halls at the heart of urban poverty, unemployment and inequality.

Locally, they provided a centre for social activities with thousands taking part in the sporting, health, educational and social programmes. Clinics and hospitals, nurseries and sports fields, social clubs and advice centres sprang from them. They spread out to include country and sea-side centres for recreation or convalescence

Five Settlements were established in the old County Borough of West Ham in Canning Town, Plaistow and Stratford. Three were Anglican foundations and, unusually, two were Free Church (Congregational). 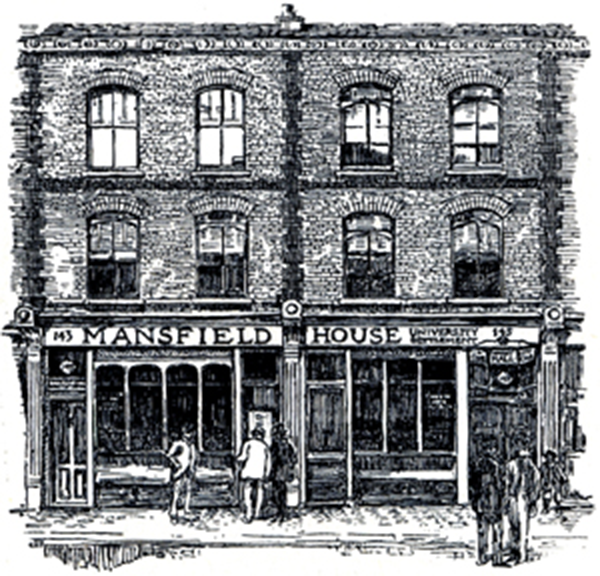 This was the biggest local settlement and the mother of a chain that spread out across East London and then to the docklands of Plymouth and Southampton. Based in Canning Town from 1894 it took over the Malvern College Mission site and work.  At its peak 10,000 people belonged to the clubs, sporting activities, nursery schools and church in Canning Town. Sir Reginald Kennedy-Cox and Captain Ben Tinton led the work -writing five books about it!

In 1958 the Canning Town site closed and was first replaced by the Mayflower Family Centre, led by David Sheppard, and then by the Elim Pentecostal River Church in 2004. Dockland Settlement work continued in Stratford and moved to the Carpenters estate and there is a nearby centre on the Isle of Dogs.

Percy Alden, M.A. (later Sir Percy Alden, M.P.) was Founder-Warden of Mansfield House. He also served as a Councillor on West Ham Council from 1892 to 1901. Mansfield house has been based in Plaistow from 1889. From 1884 F.W. Newland, a Canning Town Congregational minister, brought theological students to area, and helped the establishment of Mansfield House. It took its name from Mansfield Theological College, Oxford and Fairbairn Hall on the Barking Road E16 was named after the College Principal, Andrew Fairbairn. It developed into a large, thriving, male-orientated institution working in welfare, sporting, social, educational and political fields- with a close connection with the neighbouring Canning Town Women's Settlement.

A range of buildings were used. Two shops in the Barking Road E16, near the public hall, were used as residences and a hall was built behind them. The first 'Boy's Club' met in the disused Walmer Castle pub in 1893.  A new residential block at 89-93 Barking Road, nearer Canning Town station, built in 1897, later became a men's club. Fairbairn Boys Club moved to converted premises at 310-316 Barking Road E13 in 1895 before Fairbairn Hall was built there in 1900.

A chronological list of activities reflects both the local area and the widening agenda:

Decline followed the First World War of 1914-18. In1920 residents returned to Mansfield House. 1921 saw the setting up of teacher training courses. In 1923 the Men's club premises were sold. However Ian (later Sir Ian) Horobin, honorary warden 1923-61 revived and expanded the local work. In 1926 the Lady Trower Trust was formed to administer East Ham playing fields (between present day Burgess Road and the A406) and camp-sites at Lambourne End and Sandwich. 1935: new residences built in Avenons Road; 1938: chapel added with 100 Anglican and Non-Conformist ordination candidates a year. By 1938 Fairbairn Boy's and Men's Clubs had a membership of 5,000.

The Second World War of 1939-45 brought disruption. By 1962 membership had dropped to one third after Ian Horobins departure. Eric Shipman, vicar of nearby St Andrews, took over. Fairbairn House became a base for the Duke of Edinburgh Award Scheme. By 1968 there was a membership of 900 and Fairbairn Hall had a gym, library, theatre, workshops and canteen.

1982 saw the appointment of Geoffrey Hooper as Warden and the Board of Governors had a radical re-appraisal of premises and activities. In 1983, for the first time, a youth club was opened for girls; 1985 sees a Youth Training Scheme, psychiatric support and drama groups before Fairbairn Hall closes after fire and safety report. In 1986 the Lambourne End premises are established as a 40-bed residential Outdoor Centre

In 2000 Mansfield House merged with Aston Charities to become Aston-Mansfield.

This began in 1892 and was closely linked with Mansfield- both operated in the Canning Town and Plaistow districts and were linked with the Congregational Church. Rebecca Cheetham was the first warden .The work grew to include a medical mission, foot clinic, children's hospital, family case work, day nursery, adult schools, employment registry, the CAB and Poor Mans Lawyer.  Convalescent and seaside houses ran alongside the Newham centres which included Lees Hall [now Anchor House] and The Wellington [a converted pub] The Settlement closed in 1968 and the Cumberland Road headquarters became Lawrence Hall, part of Aston Charities.

Commenced in 1887 by St. Johns church, Stratford it was initially a local mission in iron church in Tenby (later Oxford) Road. This burnt down and was replaced by a brick building (St Phillips). In 1888 it was taken over by Trinity College. A boys club was built in Great Eastern Road.  In 1898, 60 Romford Road was rented for the Settlement House, followed by premises in Water Lane and finally into rooms above the hall in Oxford Road., E G Howarth, head of the settlement, directed the influential 1907 Survey of West Ham.  The Tom Allen Club - commemorating a former head of the Settlement - was built in Grove Crescent Road after the 1914-18 war. It survived the 1939-45 war and was taken over by St. Helens in 1943-44.

Founded in 1896 in The Grove, Stratford, it was closely linked with both the Trinity College work and St. Johns church. It was reconstituted after the Second World War as Dockland Settlement No. 9. In 1957 the Tom Allen Club was rebuilt with help from Trinity College. By 1969 the club was the headquarters of the settlement, with St Helen's House being the warden's residence.

The map and history of Newham, particularly the former West Ham area, is studded with a range of allied-and sometimes competitive- faith based Institutes, Hostels, Missions and Charities. These sprang up from local or national initiatives, and were often funded by philanthropy or charities, responding to social or spiritual needs, changing direction or sites. They sprang up alongside the Settlements and the three listed industrial and commerce initiatives

Located in the Victoria Dock Road, Custom House E16 and known locally as The Flying Angel. It was part of a national chain. A large new building opened in 1936. It is now residential accommodation, located opposite the Excel exhibition centre.

The Given-Wilson Institute: 1912-1970s Founded by and named after the vicar of St. Mary's, Plaistow E13 who did much work for the health and welfare of the poor of West ham

The Institute was founded in 1926 by Kamal Chunchie, a Methodist, in Tidal Basin Road, Canning Town, to combat the racism and rejection experienced by returning black sailors found after the 1914-18 war. It became a centre for social, welfare and religious activities with Chunchie as its first pastor and warden. Hundreds of Black and Asian people were helped. In 1935 the Old Ship Inn in Victoria Dock Road was bought to convert into an institute. Through the years, clothes, boots and shoes and coal and even money were given out to help the poorest families and outings to the seaside were also arranged.

During World War Two, bombed out and evacuated families were also helped.

Angel Lane, Stratford. E15. The Eastern Counties Railway Mechanics Institute, by 1864 had 450 members and a library of 3,000 books. In 1877 it moved to new buildings in Store Street in Stratford New Town. The Institute held lectures, classes and penny readings and was a successful venture, strongly supported by the railway company. It even opened a day school mainly for the children of railway workers. The primary purpose was educational, although there were some leisure facilities as well. Railway workers could attend classes in technical or vocational subjects, where they would study to develop their skills with a view to possible promotion.

Located in Judd Street, Stratford, E15 it served the Carpenters estate by providing evening classes on technical subjects and included a gym., and indoor swimming bath. Later, a day school was provided.

The Institute, in Albert Road, Silvertown E16, was built by Sir Henry Tate Bt., for the use of sugar workers at the nearby refinery. The building was sold and West Ham Council opened a library in it. In 1961 the library moved to new premises and the building was lease back to Tate & Lyle and used as a social centre. Now (2011) it is closed and boarded up.

The YMCA had centres at Forest Gate, E7 which opened in 1906, with a hostel in 1913, both closing in 1959;  and in Plaistow with the Red Triangle Club, Greengate E13, (1921-1956) - It was part of the North East London Polytechnic (which later became the University of East London). In 2009 redvelopment began to convert the premises into apartments.

Barking Road, Canning Town E16 was opened in 1962 by the Roman Catholic Apostolate of the Sea as a hostel for seamen and is now there for the homeless. It is built on the site of the site of the former Lees Hall (Canning Town Women's Settlement) and adjoining properties.

This Essex public school worked through the Church of the Ascension in Custom House E16 from 1880 to build halls and pay clergy. A mission house for women was opened in 1909.

Located on Barking Road, Plaistow, E13, this was a Baptist venture, growing from the local church, led by the Rowntree-Clifford family and supported by churches and wealthy donors. It grew from 1904 to include labour yards, hostels for old people, workers and overseas students and added country centres in Essex for children, boys, and rehabilitation.

Aston moved from Limehouse to establish Durning Hall, Earlham Grove, Forest Gate E7 in 1953 for 'residential, social, welfare and religious work'. Lawrence Hall, Cumberland Road, Plaistow E13 (on the site of the former Canning Town Women's Settlement) opened in 1970 as a Christian Community Centre with sheltered housing. The Froud Centre, Toronto Avenue, Manor Park E12 developed in 1992 on the site of and incorporating St Michael's Anglican church. It provides social and leisure facilities and has accommodation on the first floor. Bridge House Hotel Westcliffe-on-sea, Essex was opened in 1971 as a holiday centre for the elderly and disabled.