This website carries the stories of religion and faith in the London Borough of Newham.

Newham is now the most religious Borough in the UK according to the 2011 Census. Much influenced by immigration, people movements and globalisation.

Here Christianity, Judaism, Islam, Buddhism and Hinduism have all arrived, settled and influenced the community..

Their stories are recorded in this web-site. Here you will find overall analysis, individual accounts, pictures and stories. History, growth, decline, change and flow…tradition and the spirit…. are everywhere.

Behind the details are published resources. They include The Victorian County History, Newham Directory of Religions, Newham Recorder, Diocesan Directories, Stratford Library Archives.

Within the details are places, people, pictures. ….denominations, groups, events. Each entity is different. Some are more detailed than others. Some are summaries, others a reference on to other resources.

This website is not a book. It is a collection. Dip!  Search. Look around you. Catch up. Join in. Something is happening in this part of London.

This website contains many details of places, people and pictures in the London Borough of Newham. It covers nine centuries of time, an ever-changing flow of population and the stories of faith and religions.

Errors and omissions are inevitable within such a framework. We apologise for these and welcome any corrections.

The Heritage of Faith(s) in Newham

The London Borough of Newham in East London was formed in 1965 from the old County Boroughs of West Ham and East Ham. It was host-borough for the 2012 Olympics and is home to West Ham Football Club, Excel Exhibition Centre and London City Airport.

Newham is framed on three sides by the rivers Thames, Lea and Roding-and fringed to the north by the remnants of Epping Forest. Poised between London and Essex the marsh lands of West and East Ham had a small population of 7735 in 1801.

The Industrial Revolution of the 19th Century brought the docks to the south, railway works to the north and a variety of factories alongside all the rivers.

From the 1950s several waves of immigration from across the world have changed the face of Newham. This, together with the highest birth-rate in the UK, has lifted the population figures to over 350,000. Underlying social problems of unemployment, poverty and a transient population persist even as large scale regeneration accelerates.

Christianity began with Stratford Langthorne Abbey, Founded  in 1135 and closed by King Henry VIII in 1535, the Abbey dominated the area. Today Abbey station marks the site.

From 1538 the Church of England was formed and took over all Christian sites. Three 12th Century parish churches in West Ham, East Ham and Little Ilford are still there - joined by more than 60 Church of England churches from the mid-1800s. 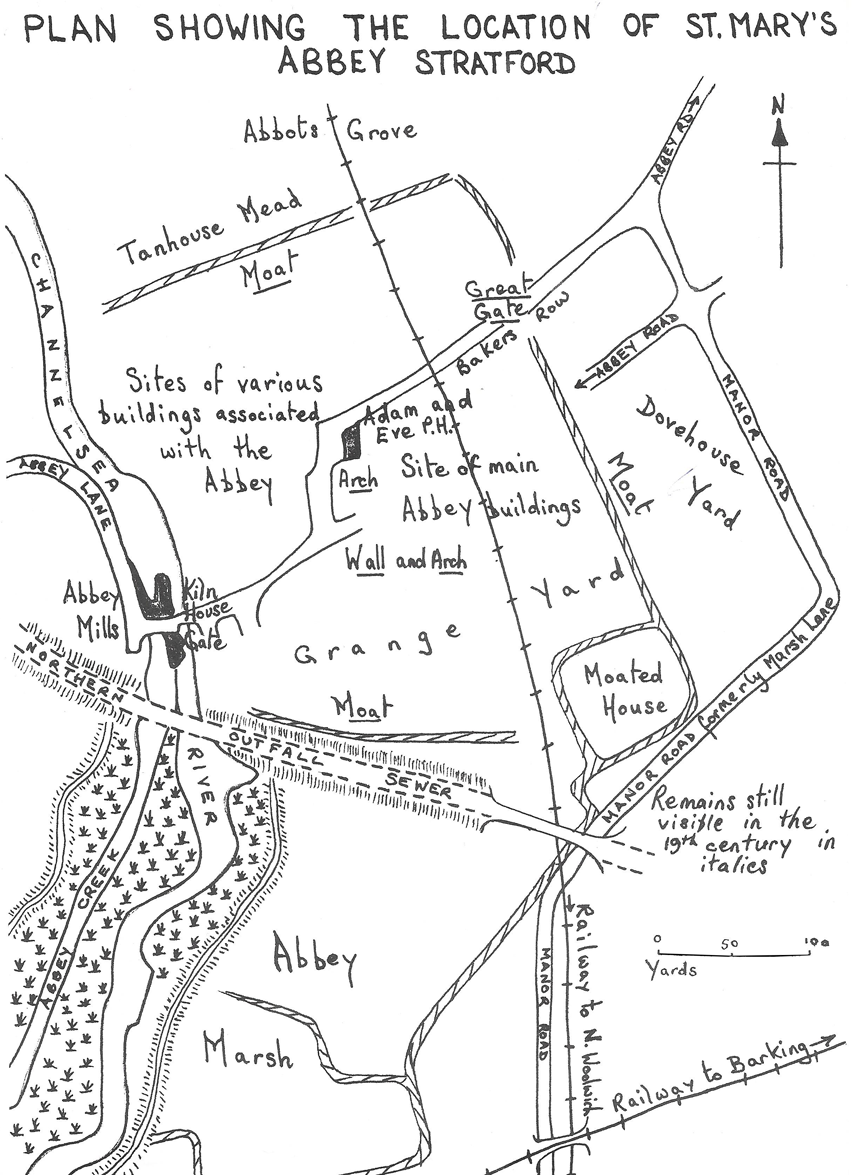 From the late 1950s Muslims, Hindus, Sikhs and Buddhists joined old and new churches to create an inter-faith landscape. Sikh Gurdwaras arrived in 1958. Muslims came to Canning Town in 1964 and are now a growing third of the population. Hindus were in Stratford by 1968 and by 1978 the Sri Murugan Temple in Manor Park was the biggest in Europe. Buddhists worshipped in halls in 1980s with temples from 1990s Over 300 new churches, mainly Pentecostal and black-led, began in 1975 with Cherubim and Seraphim in Forest Gate. They include Seventh Day Adventists, the Russian and the Greek Orthodox,

Milestones - Some Significant Events in Newham

DOCKLAND SETTLEMENT in Canning Town. Largest Settlement in UK with 10,000 members and 9 branches.

HOW GREAT THOU ART  Most popular British hymn was launched from Manor Park Baptist church after translation from Russian.

SIKHS claim 1958 as first ethnic group to settle with Gurdwaras. 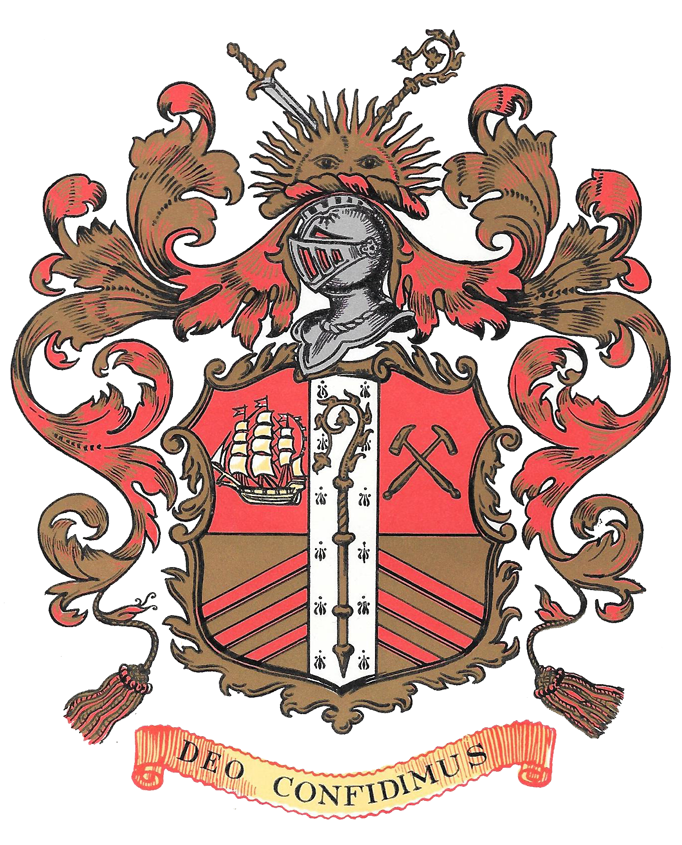 A Contemporary Overview of Faith(s) in Newham

This overview is based on the 2014 edition of the Newham Directory of Faiths, compiled in September for the Community Involvement Unit at Aston-Mansfield. Given the rapid changes and small sizes of many groups, it cannot be a comprehensive overview, but it offers a picture of the different faith groups active at this particular point.

Newham has a remarkably high level of religious activity and belief: in the 2011 census, only 9.5% of residents said they had no religion, compared to the national proportion of 24.7%. This fact is reflected in the sheer size of the directory of faiths, which in this 6th revision has expanded to 303 entries.

The intensity of religious activity in Newham is matched by the diversity of faiths. Broadly, 9 faiths are currently represented: Christianity, Islam, Hinduism, Sikhism (and Ravidassia), Buddhism, Spiritualism, and faiths which embrace all religions, such as the Sathya Sai Baba movement. The major religions not represented are Judaism and the Baha'i faith.

Nevertheless, as in the rest of London and England, Christianity remains the largest religion in Newham. In the 2011 census, 123,119 Christians were recorded, about 40% of the population of the borough, though this is lower than the national average. The directory contains 215 Christian churches and groups, and Christian groups take up 75% of the directory. This disparity is explained by significantly smaller membership numbers in churches than for other places of worship. 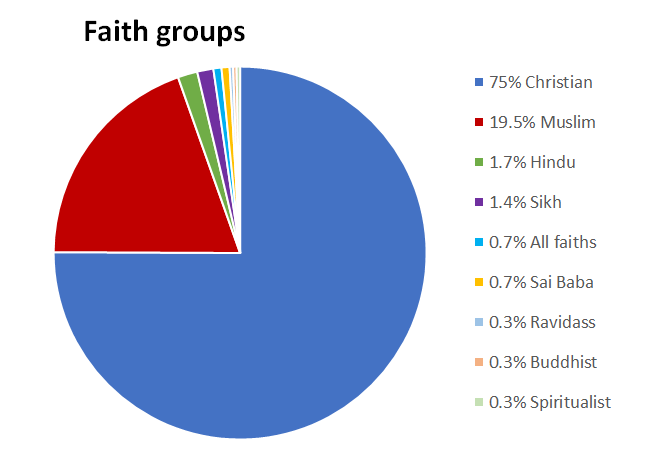 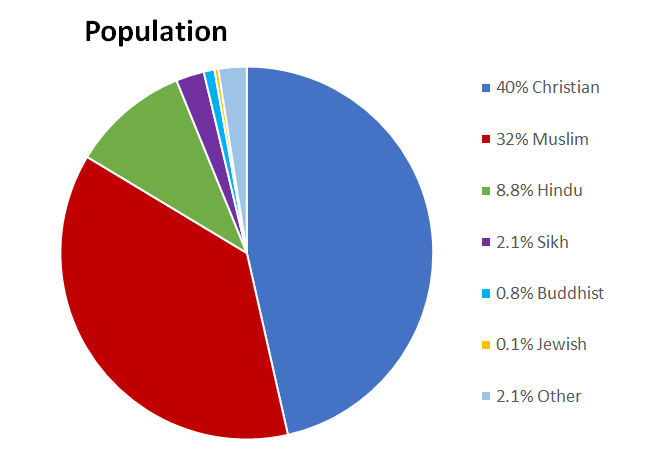 Christianity in Newham is far from homogenous: the largest number of churches are Pentecostal (36% of all Christian groups in Newham), reflecting the global rise of Pentecostalism. Although many of these churches are independent, a significant number are branches of international, especially African, churches (most commonly the RCCG). Of the other 63% of churches, many are independent evangelical churches (14%). Roman Catholicism and the Church of England are reasonably strong across Newham, with 24 churches or groups each (11.3%). Older non-conformist churches are also present still (e.g. Adventists, Methodists, the Salvation Army, Jehovah's Witnesses, Unitarians, URC, Christadelphians, Moravian); the strongest of these is the Baptists, with 14 churches and groups (6.6%). There are also 11 religious orders in Newham, 10 Roman Catholic and 1 Anglican. 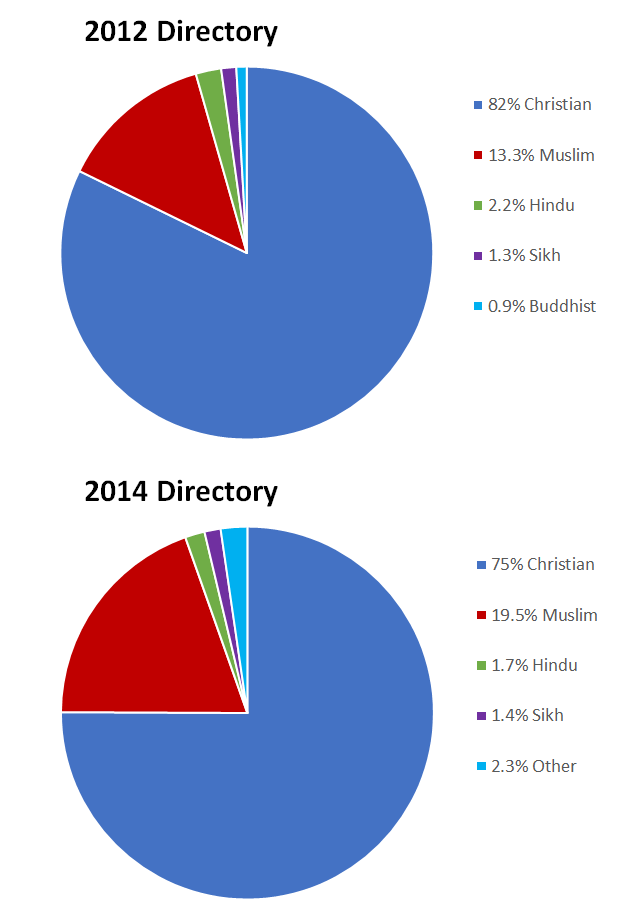 Along with Christianity, the largest faith group is Islam. Newham has one of the highest proportions of Muslims in Britain according to the 2011 census: 32% compared to 12.4% in London and 5% nationally. There are 56 mosques and Muslim groups in Newham, 20% of the total directory. Of these, the large majority (68%) is Sunni (predominantly Deobandi, but a number of Barelvi), and 2 are Salafi; among the others {many of which are non-denominational), there are 2 Ahmadiyya groups and one Shia mosque.

Islam is the fastest growing faith in Newham: there has been a steady increase in mosques and Muslim groups throughout the directories, but the rate of growth seems to have accelerated between 2012 and 2014, when the number increased from 30 to 56.

The largest of the other faiths represented in Newham are Hinduism and Sikhism. Newham has a particularly high proportion of Hindus (8.8%) compared to the national rate of 1.5% Sikhs account for 2.1% (0.8% nationally). There are 5 Hindu temples and 4 Sikh gurdwaras (and 1 Ravidass gurdwara).

Differences within areas of Newham

Christianity dominates in the southern wards, while further north, in Manor Park, Forest Gate and Stratford, there is far more diversity. Manor Park is the most diverse area, and is particularly interesting for the emergence of more universalist groups claiming to represent all faiths. Forest Gate has the highest number of Muslim groups.

The History of Faith(s) in Newham